This is the second day of the trip where I went along with 2 travelers to Mount Bromo, Ijen Crater and Sukamade Beach. 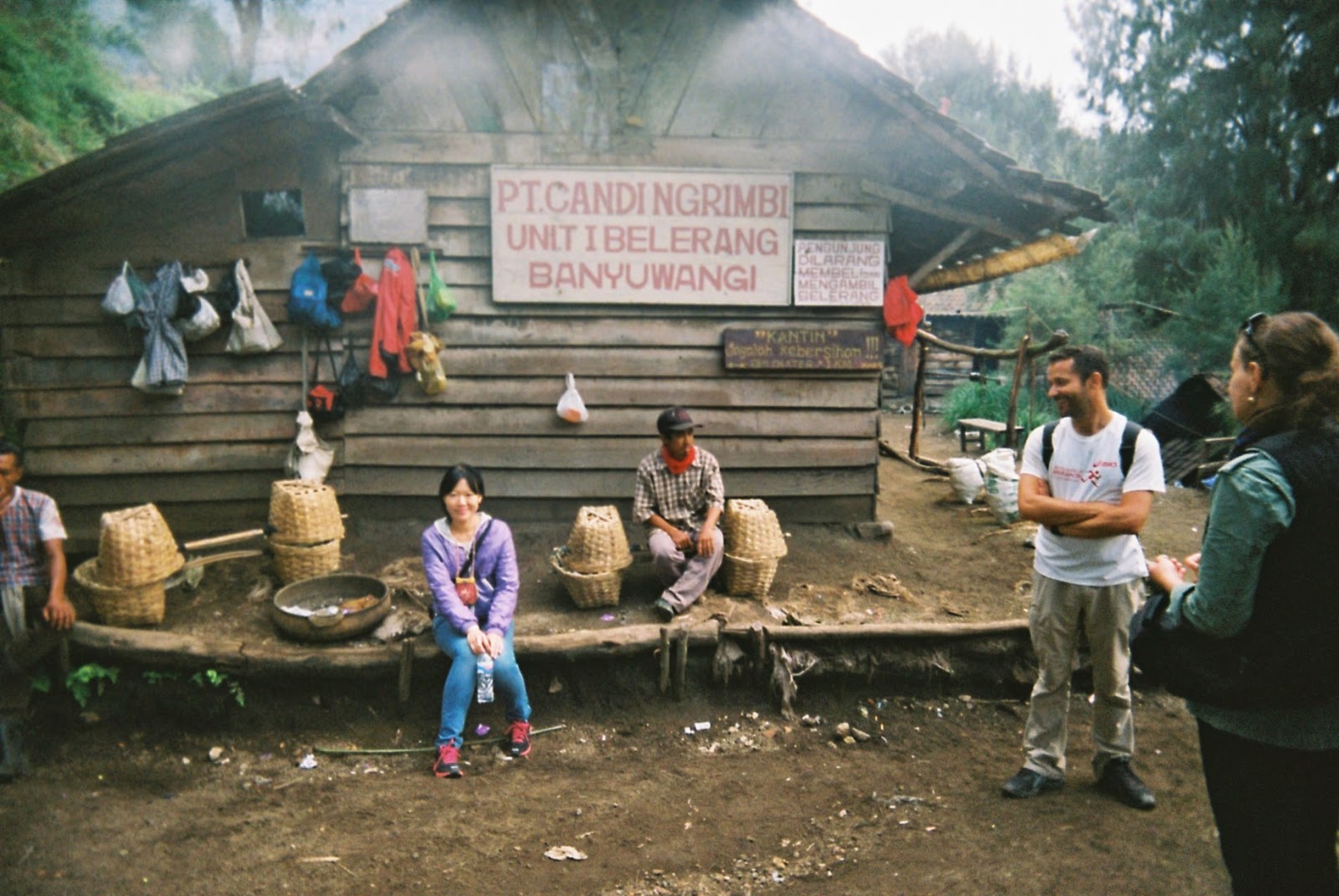 About a third of the way down from the crater, this quaint Dutch-built place was a usual pitstop for the sulphur porters- complete with a small canteen. It's the place where they weigh their sulphur of the day, and deposit them for a daily wage. I was told many of them eat 4 kg of rice everyday to replenish their strength.

When I close my eyes, I can still picture the precise, perfect moment of being up the crater.
A real crater!
Beholding the turquoise heated lake in the crater. Fifty degrees of liquid blue.
Seeing sulphur porters carrying baskets of sulphur blocks up from the spewing, smoky corner of the ground near the lake that produces 20 tons of sulphur a day.
Misty skies that burned with the 'evil-smelling' sulphuric acid.
Having a muscular, smiling, man beside me. (Maybe a hallucination.)

And the mountains, the rugged, rocky hills that seemed to tell a story of its own.
The silence of these rocks with the precise, perfect weather.
Ooooooooooooh-la-la!

Being a non-hiker/climber, this trip was a big one for me.

It was a 3 km trek - winding and uphill on ground and trail for most of the terrain until the top of the crater, 2,400 m at its height. In pitch darkness to catch the early morning rays, I stumbled through, stopping to catch my breath around most turns, drinking water and eating some chocolate flavored energy gel. It did not help that I had a weak throat due to being sick with a month's-long pharyngitis infection. Not to mention that the day before, I did Bromo.

No excuses, I was determined to make it, though the distance proves unnerving for beginner hikers. Be warned! On the way back I mostly slipped and slided my way down with my silly peanut like soled Adidas trainers. I will be more prepared with super hiking shoes, super windbreaker and super hat for next trips of such kinds... 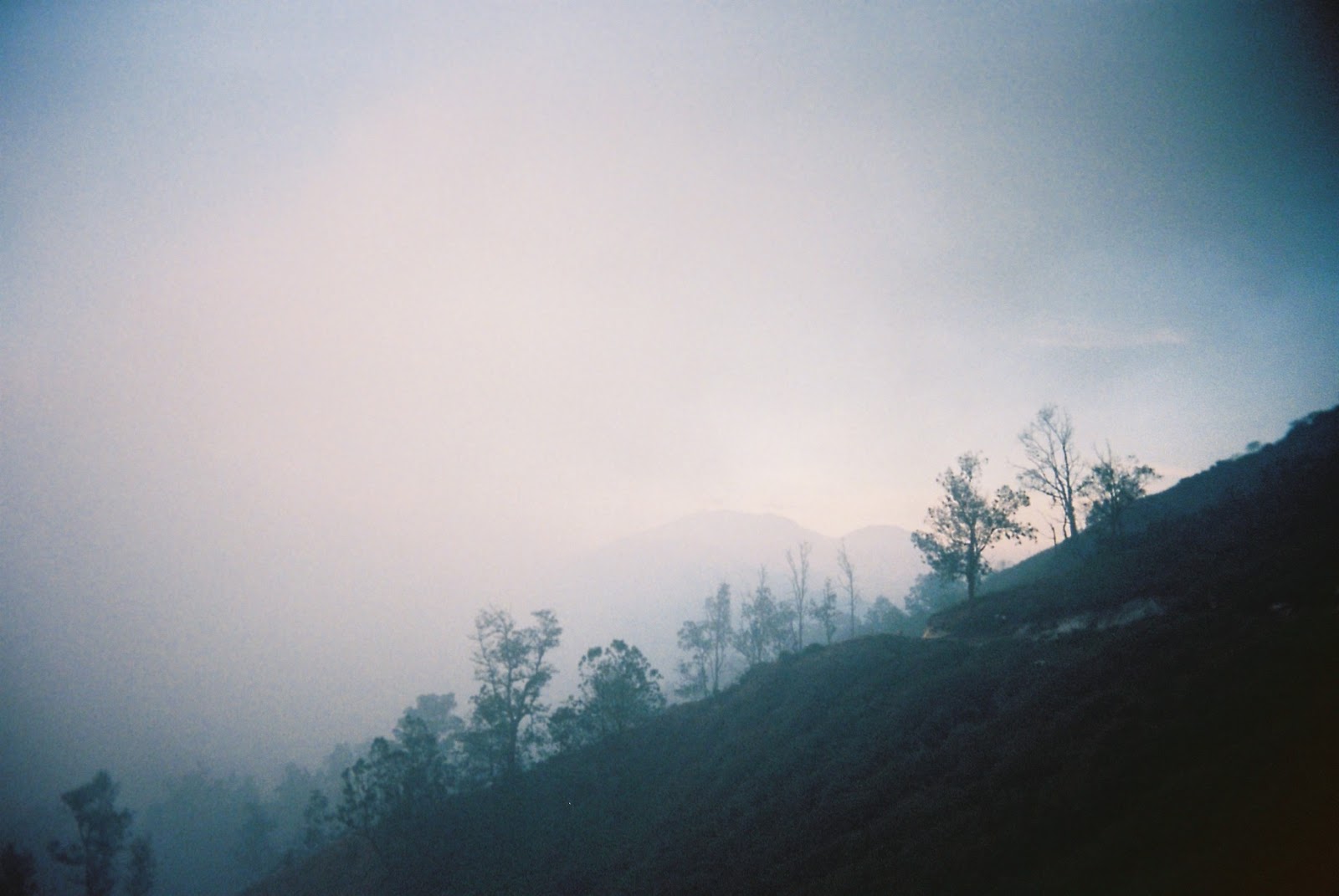 While my friends bounded ahead I took a grandmother paced walk uphill and saw breaking dawn at about 3/4 way there. The heavy mist was caused by the wind blowing into the sulphur fumes produced. 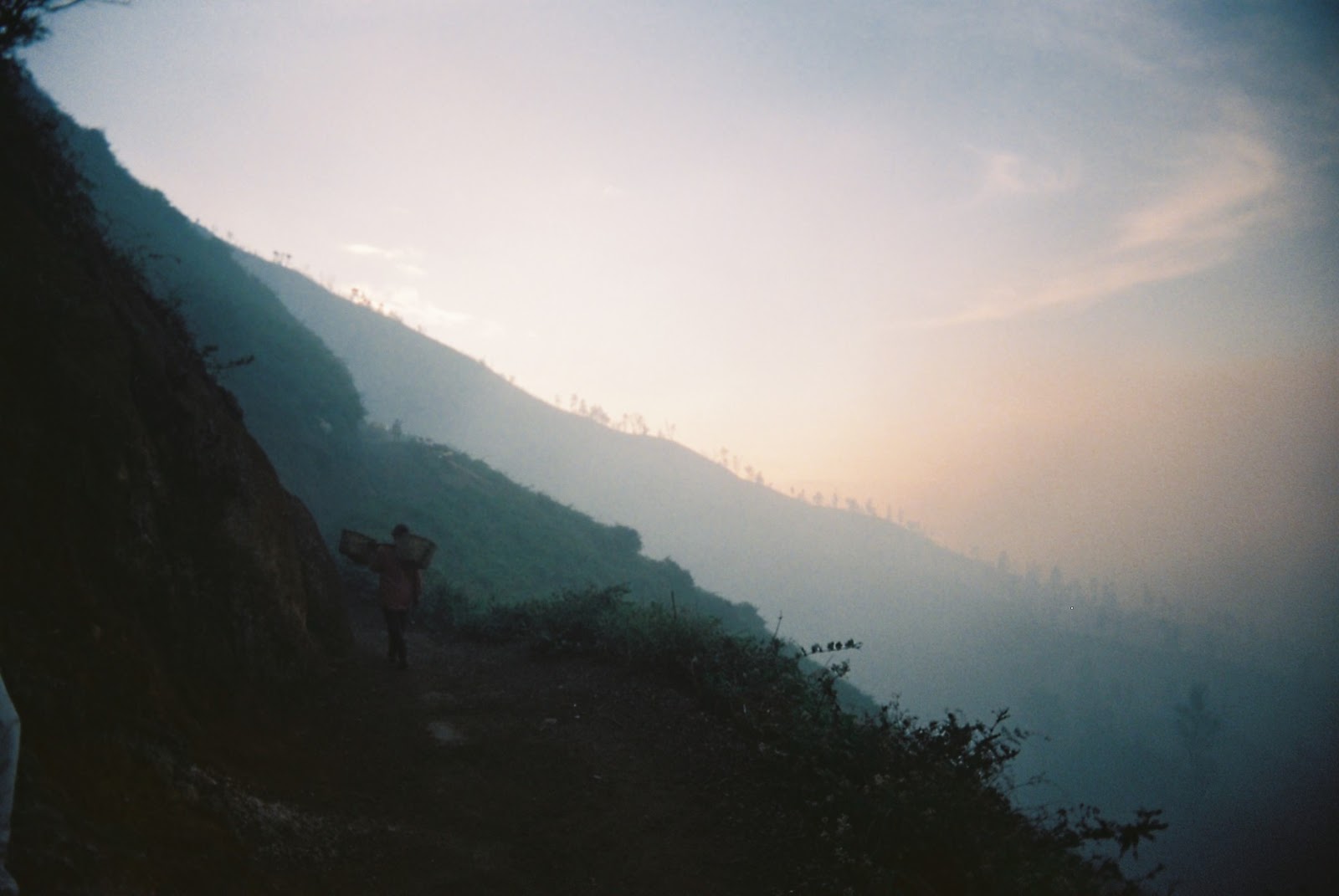 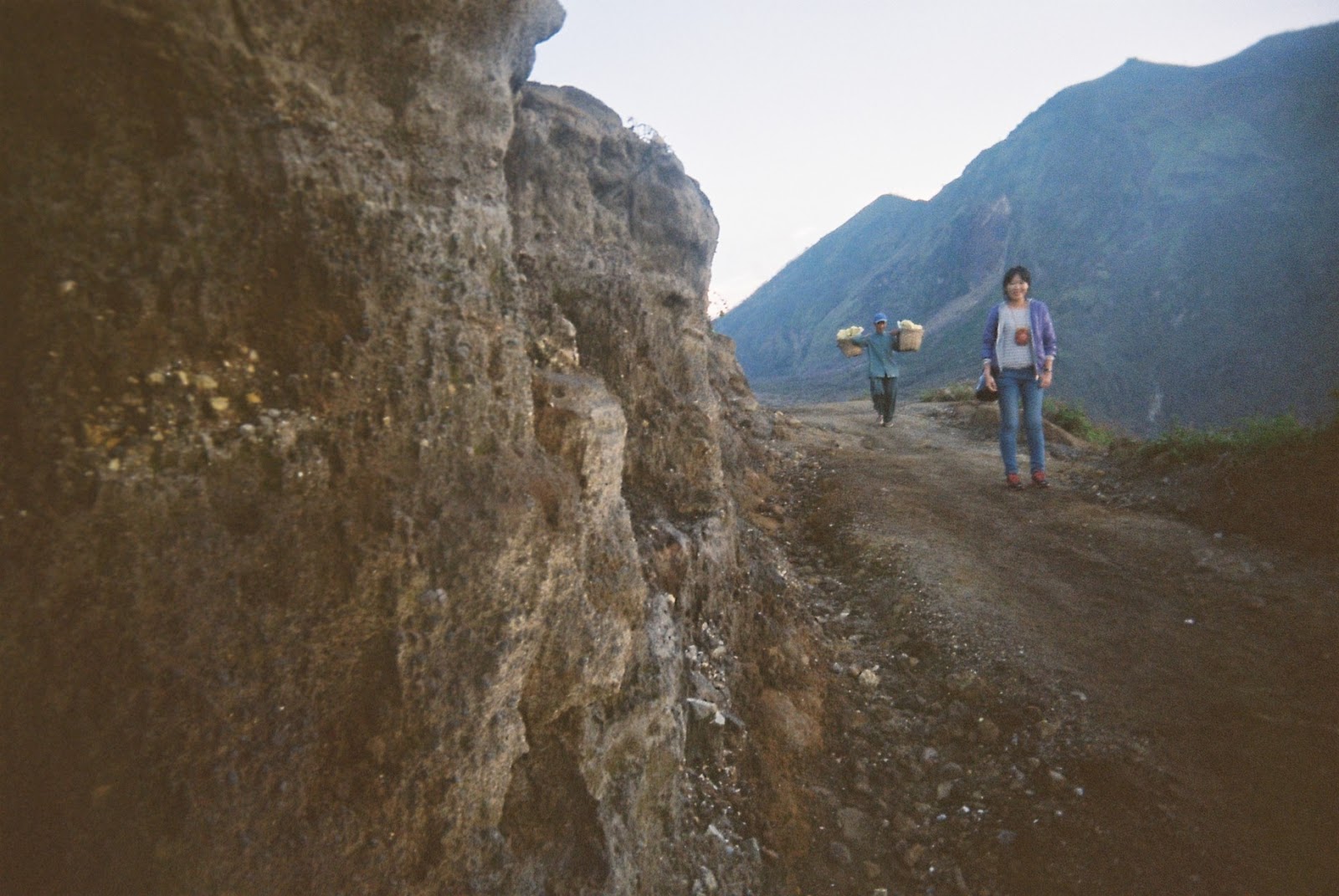 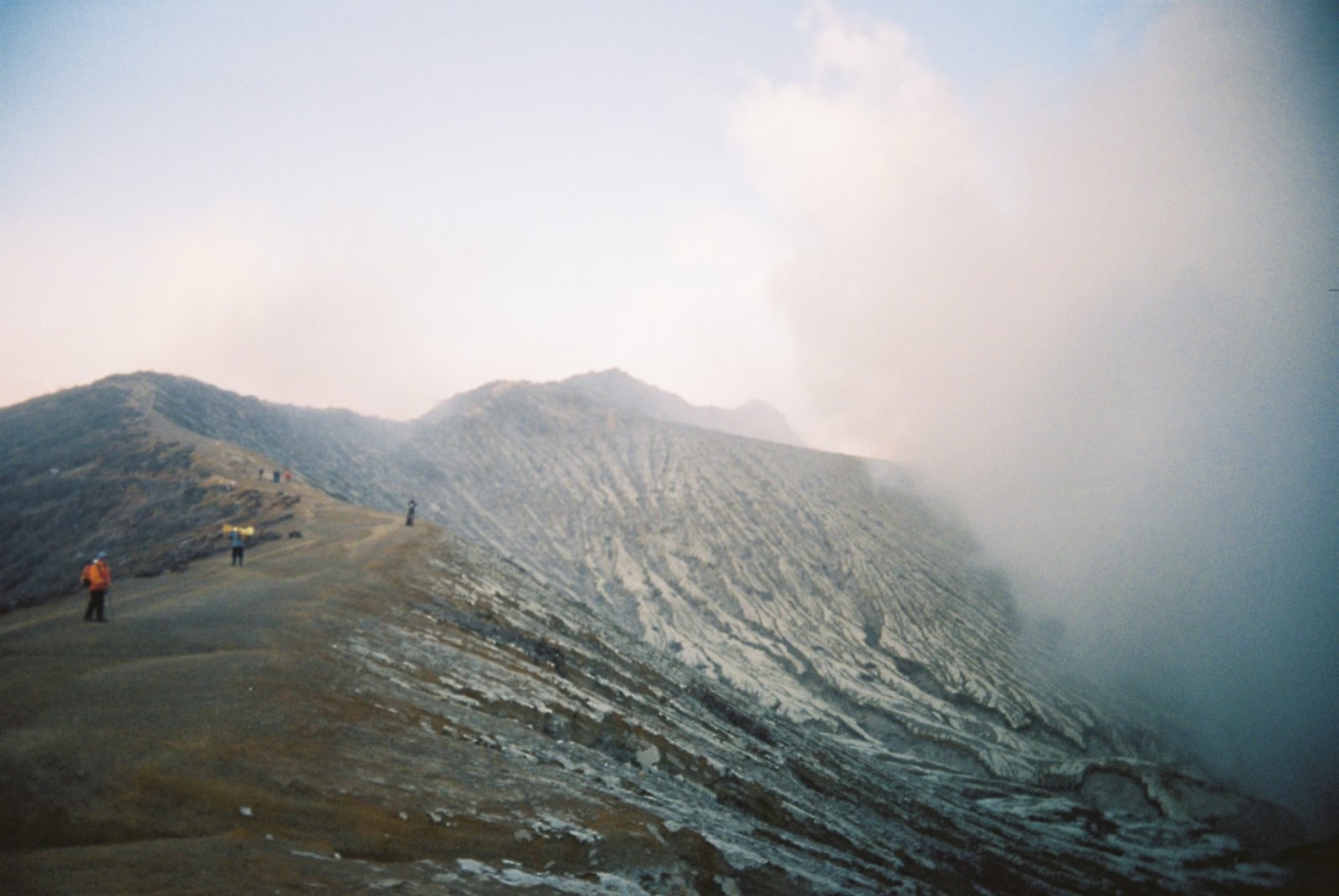 The face of the Crater leading into the lake. Simply an amazing sight. Despite the people - sulphur porters working, guides and tourists from time to time, the place had a desolate feel, a silence shrouded by mist that makes you want to whisper. Some would find it unnerving, especially if you are being used to city noises - but if I had to choose between jungle sounds, city hubbub and mountain silence, I would choose the latter. 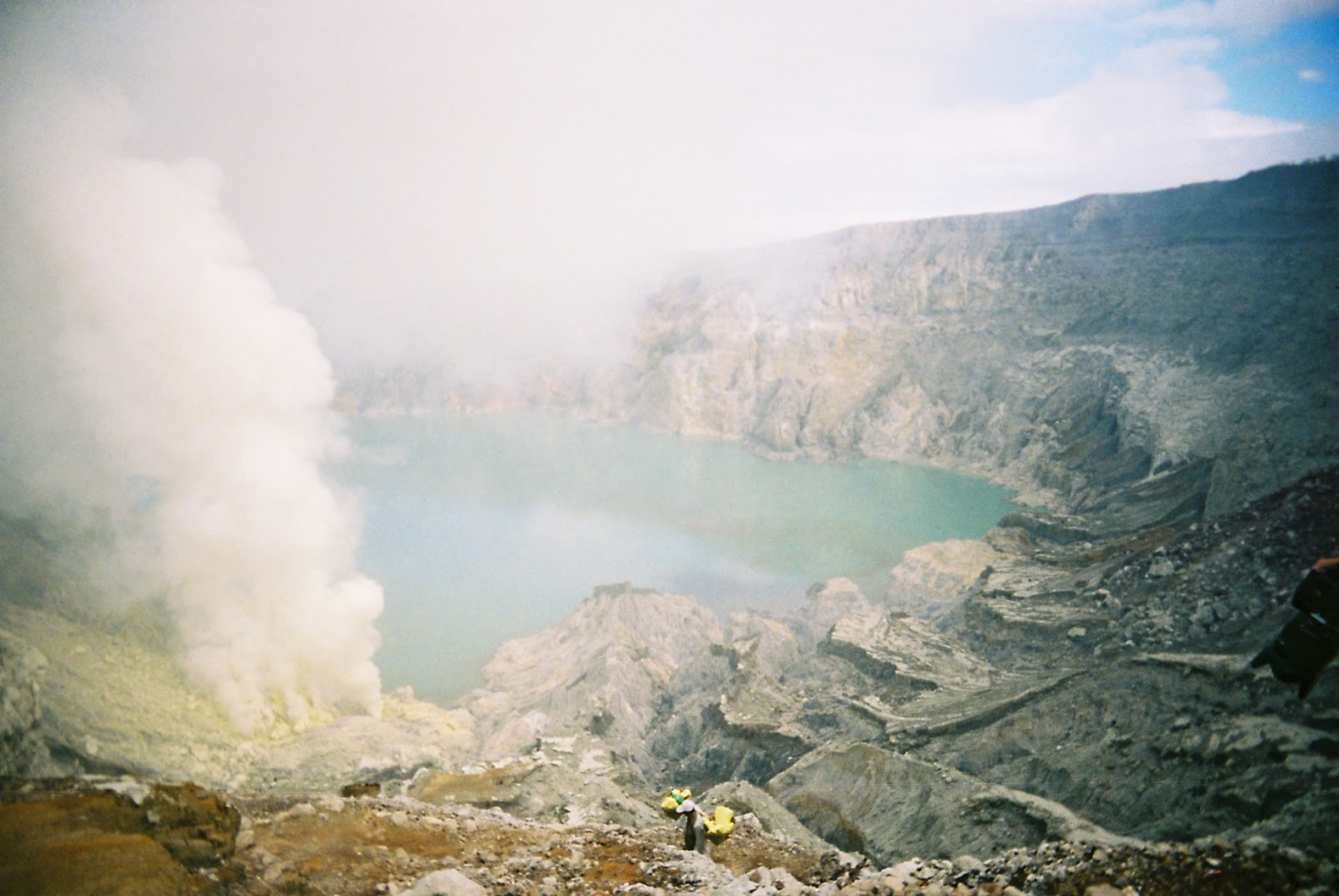 It was so fascinating to see the different colors and types of rocks. Most of the time seen under a layer of sulphur fumes but if you are patient, the wind direction shifts and the lake turns turquoise and you can see amazing ancient rock formations in the distance. 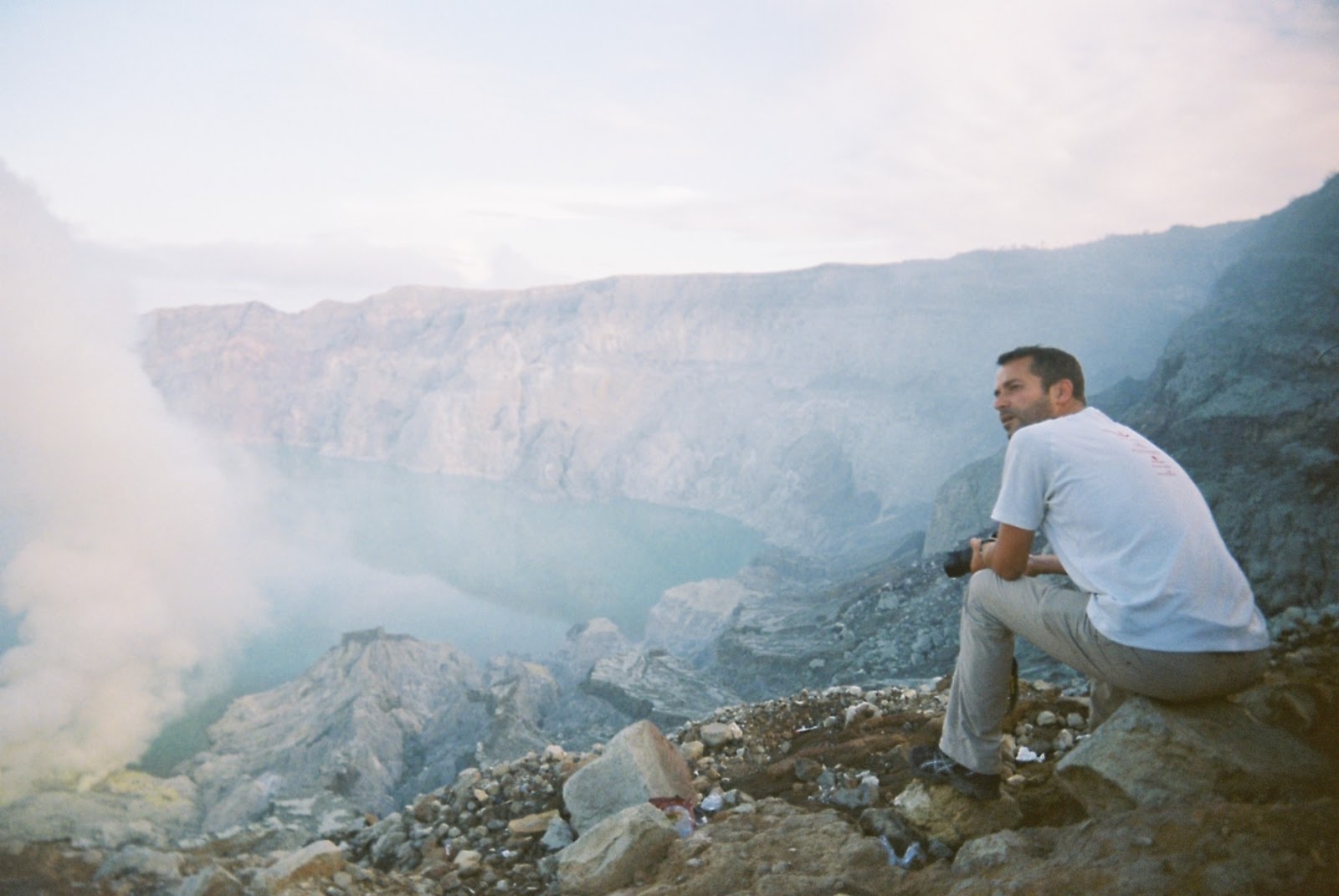 Craterman (CM): New Canadian superhero. Comes with powerful camera. Seemed to have materialized out from the rocks beside me...also wearing a suitable outfit for this photo. I don't usually take photos of strangers but it's Craterman! 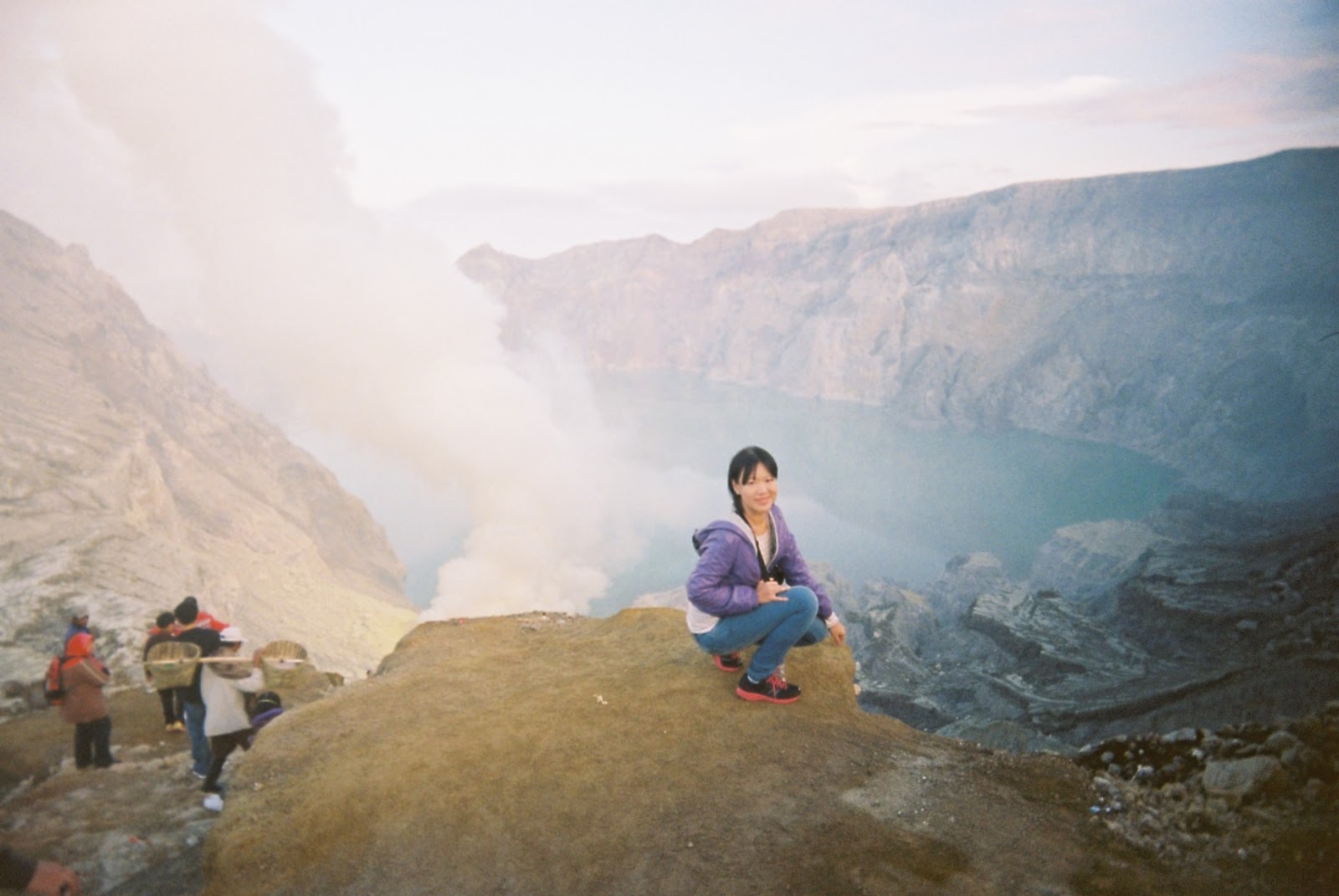 My legs were trembly at this point from the walk. I tried not to fall off... 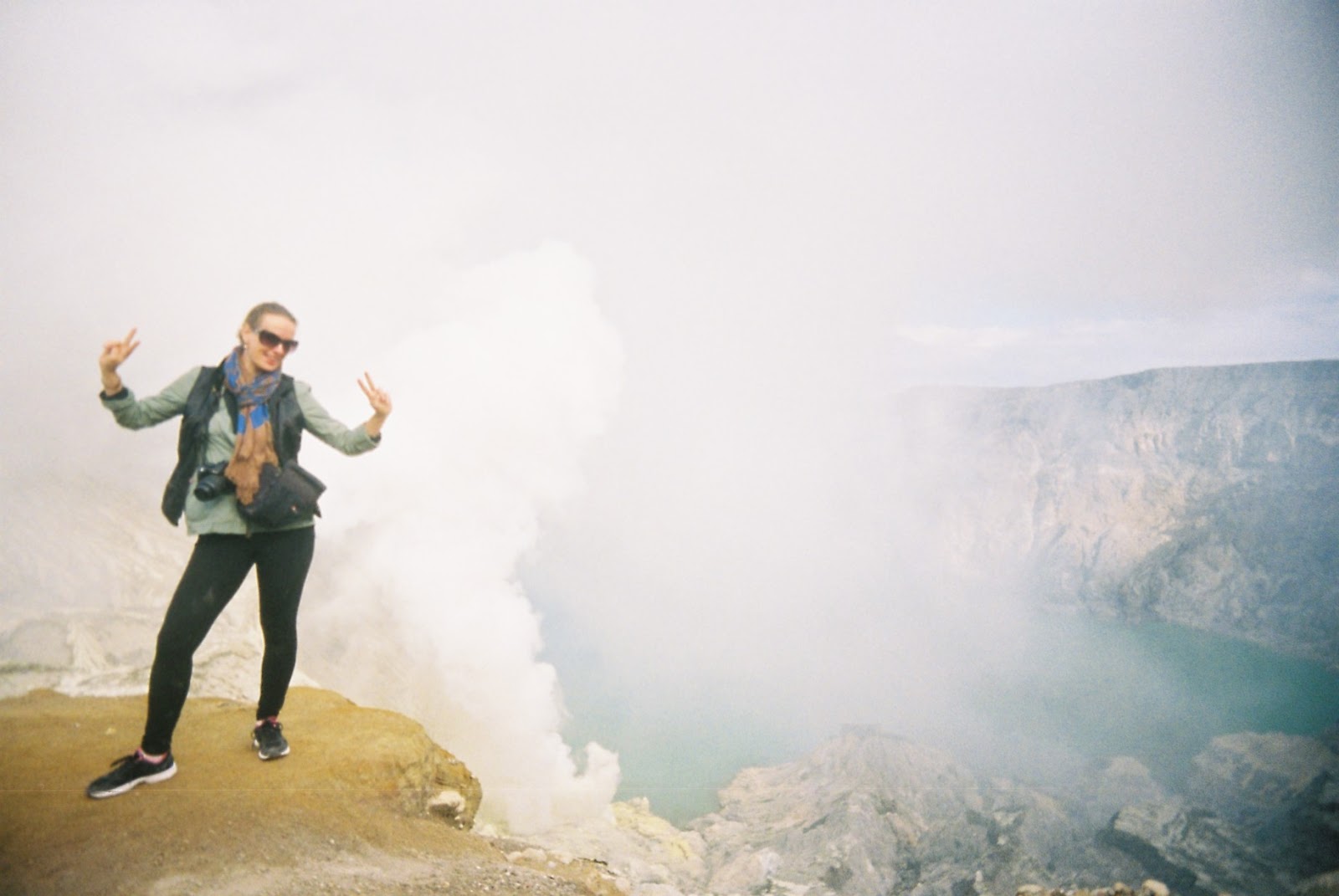 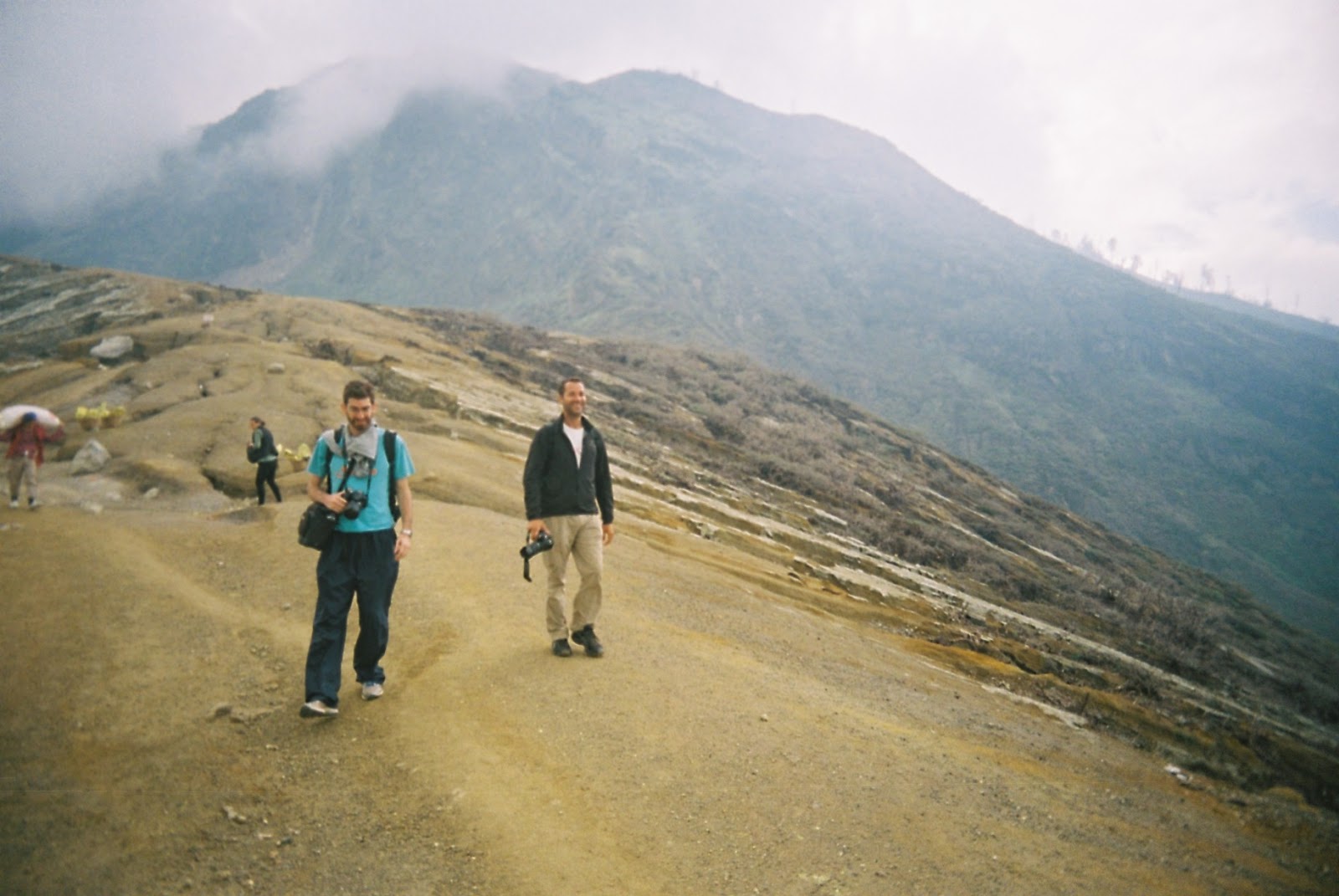 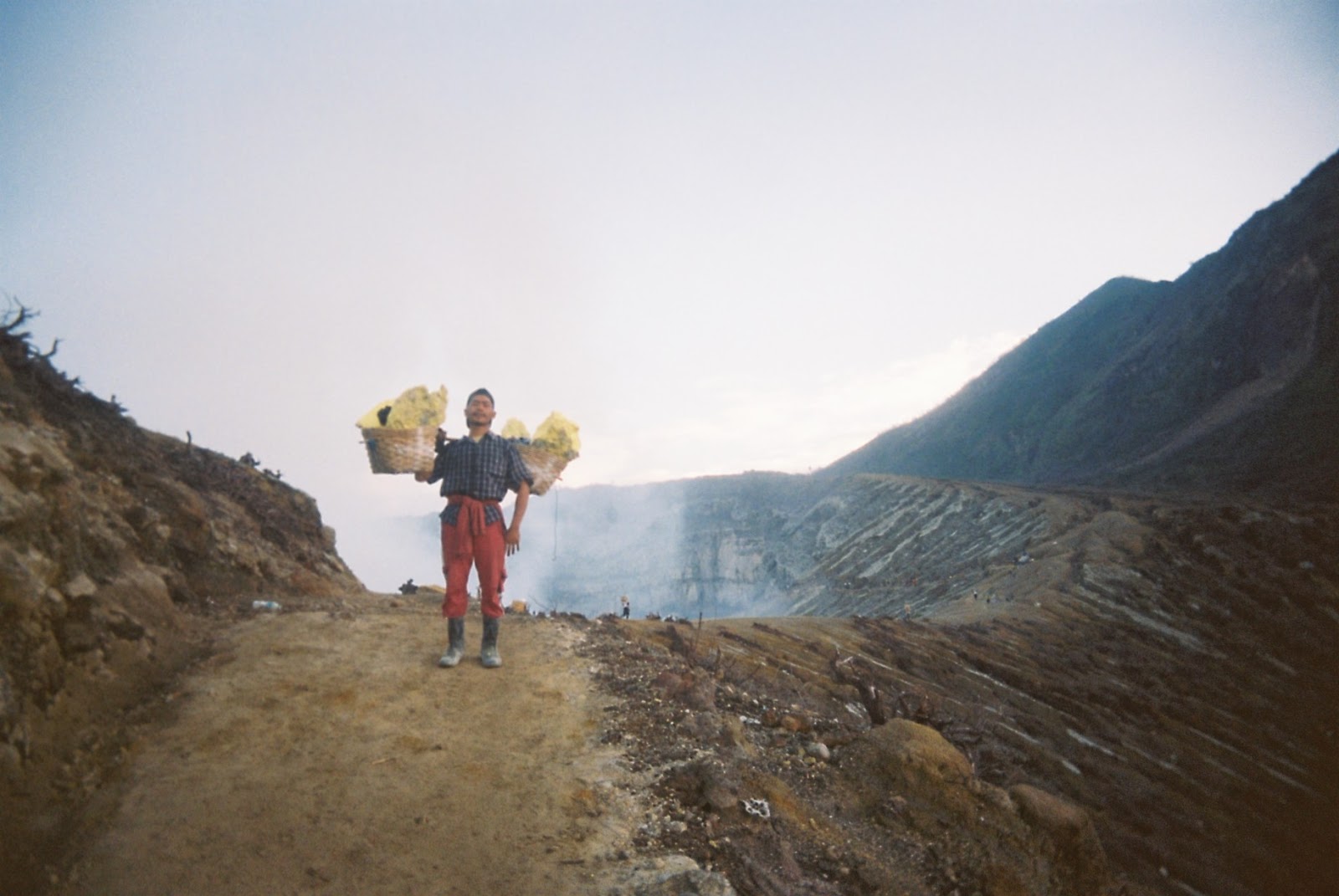 The inner sartorialist in me halted the porter to stop and he gamely posed for me. Unlike the other porters in dirty looking, torn teeshirts and some with rubber slippers, he was chic in a plaid long sleeved shirt, red pants and rubber boots. His other accessory was 70 - 100 kgs worth of sulphur blocks. 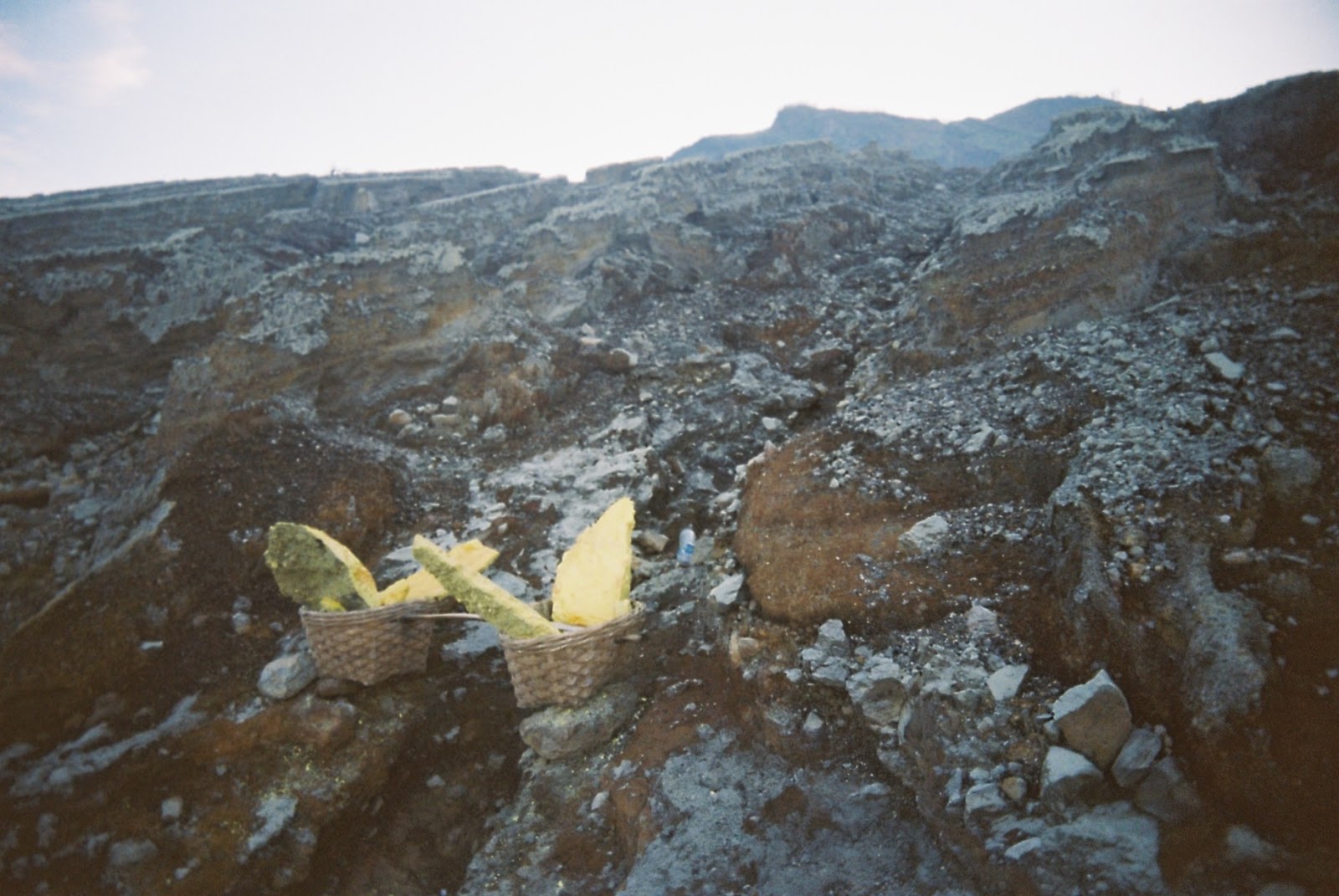 Each of the 450 sulphur workers had to load 2 basketfuls' of sulphur per day and started as early as 3am as they were not allowed to work when it got too hot and dangerous. We were told they earned about $8 per day so that was pretty good salary as compared to the average East Java worker. However, it was a tough job, most working at the sulphur mines starting from 15 to 55 and many Javanese pitied them for not being able to carve out another niche - they were mostly uneducated. We were told some suffered from sulphur exposure, having loose teeth, yellowish pupils, weakened joints, but they all seemed in good health to us, and perhaps they are superhumans too! 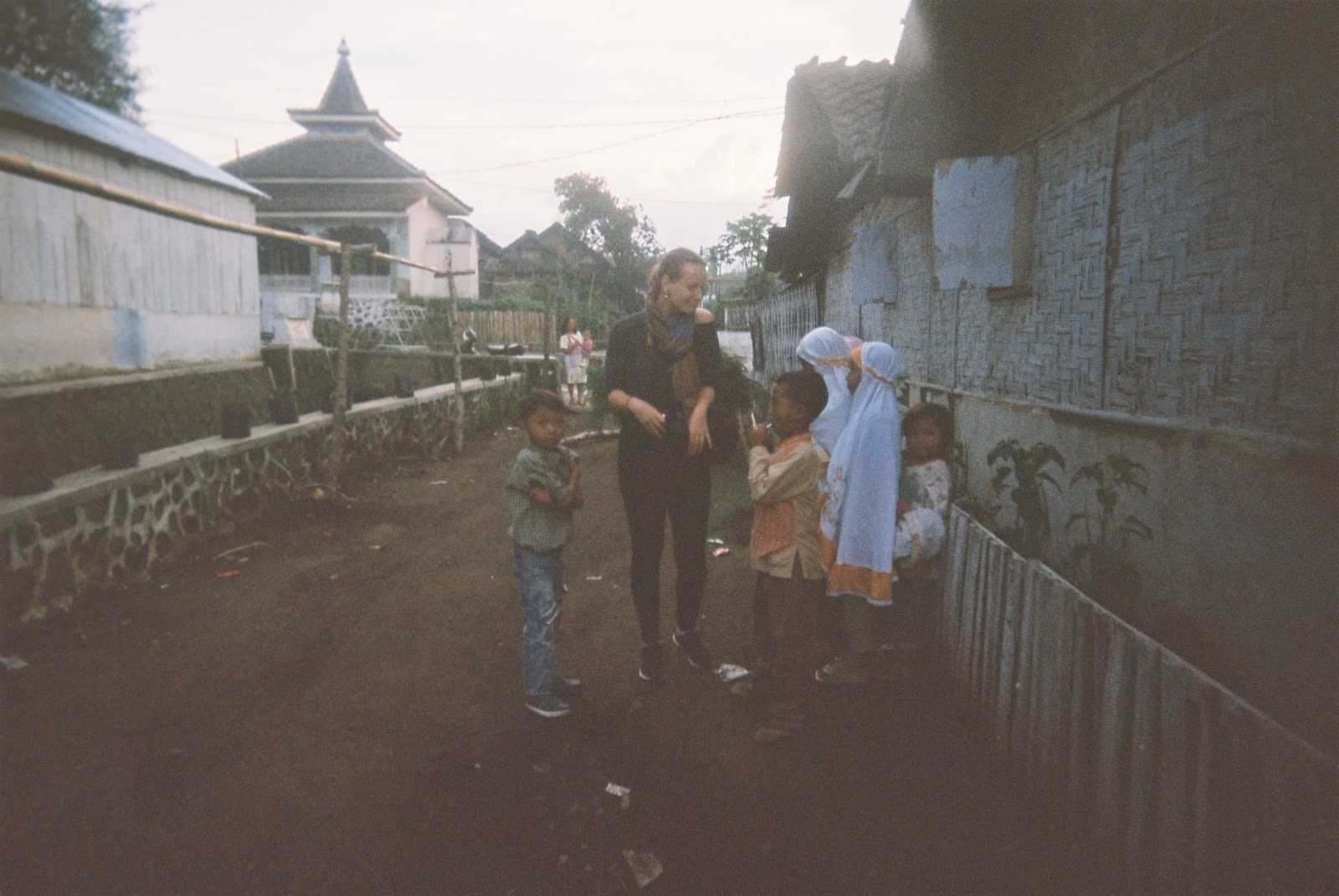 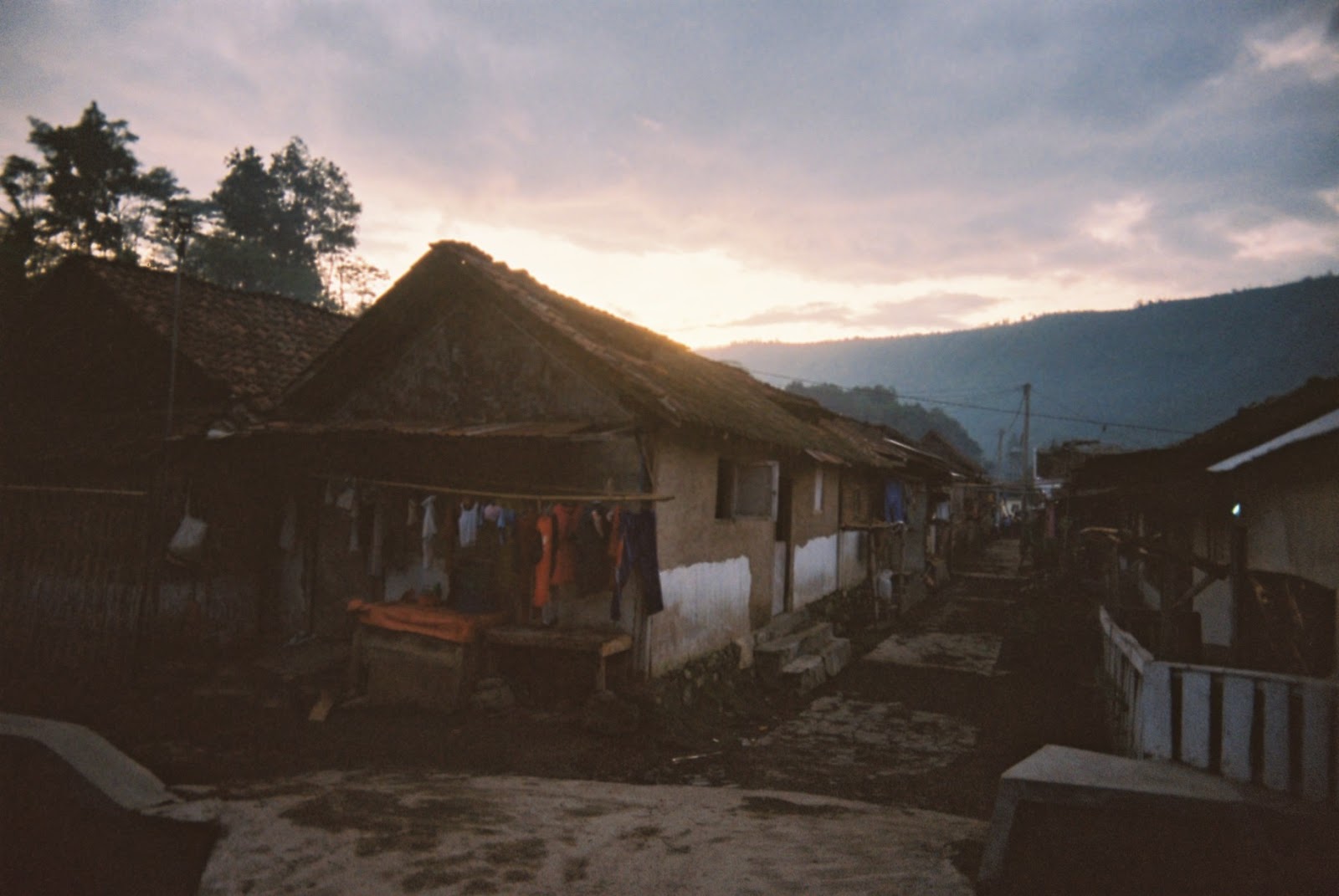 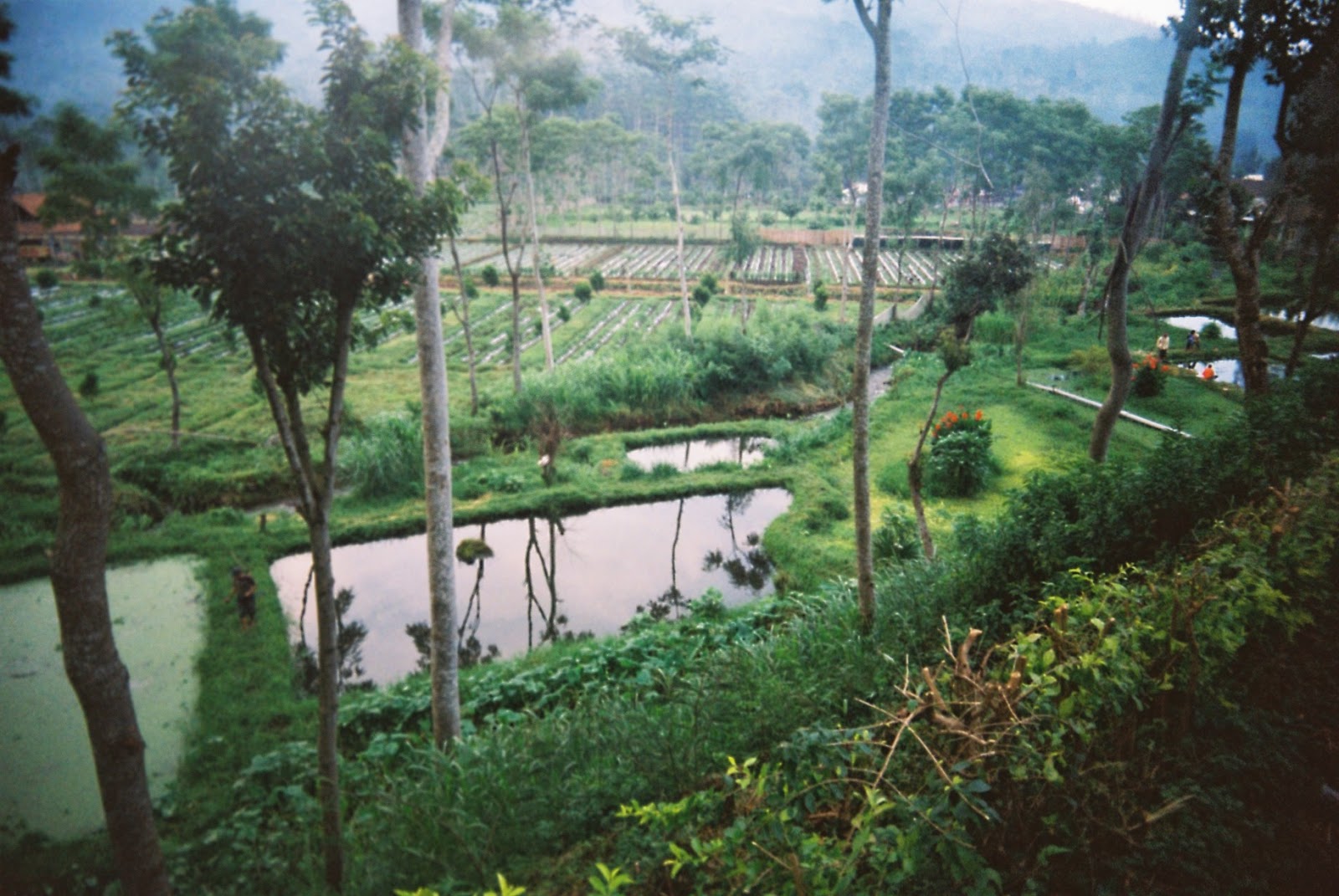 Notes:
For physically fit hikers it is about 90 minutes trek to the top of the crater.
For me...well... it is more than that.

We stayed the preceding evening at Arabica Homestay, just a short walk away from our quaint chalet style accomodation there was a nearby commune-like village where I was told, the villagers never left the place - unless they stopped working in the organic plantations. Therefore the village was enclosed, very friendly to strangers and had an artificial waterfall, pipes for irrigation and a stream for bathing. The children crowded around us and practiced their English, as we walked past their residences the adults were also friendly and polite. It was a pleasant evening walk and possibly the most friendly village encountered.

remember me - we met today at the photo prize ceremony

my phot and urs are displayed side by side.

read your blogs and also liked your pics - nice - keep up the good work.

my email is pradeepchamaria@gmail.com - in case if u wish to exchange further pics