Bali in a weekend: Trekking up the Batur Caldera area 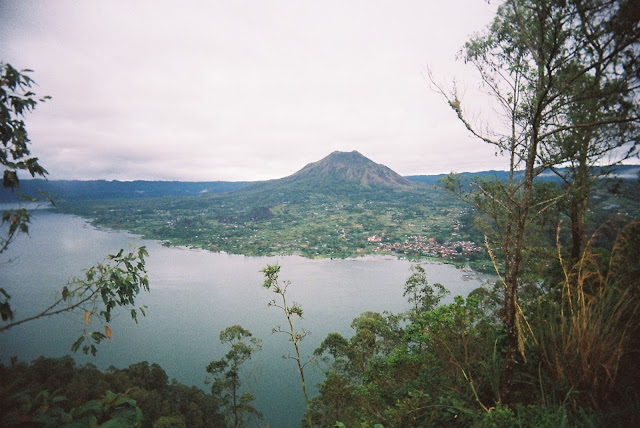 There are several hiking spots in Bali, but I chose the Batur Caldera trek because it afforded great views of the lake and the surrounding village, to my surprise, quite a modern village - and of course sunrise views of both mountains framing us. It was also a less strenuous trek compared to climbing Moung Batur or Agung. I'm not really a sporty person, so I just prepared myself by hiking every Saturday early morning, with Dad, on the trails in Singapore - Dairy Farm Road, Trail Route 3 on Bukit Timah Hill, Wallace Trail, Pulau Ubin. It was a weekly 2-4 hour activity that left me immensely sleepy right after. 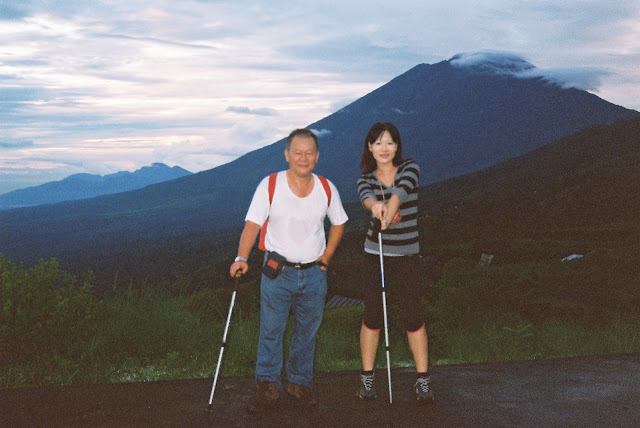 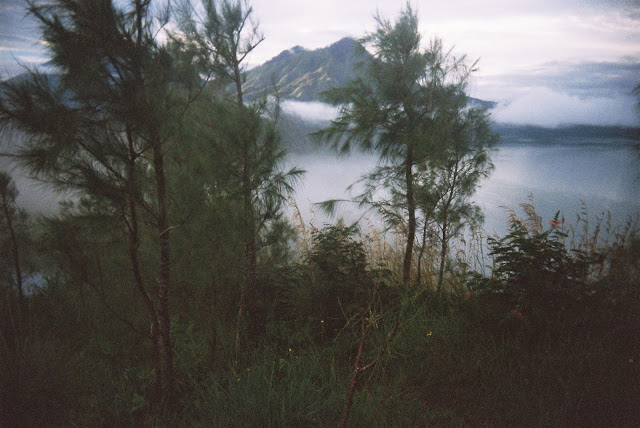 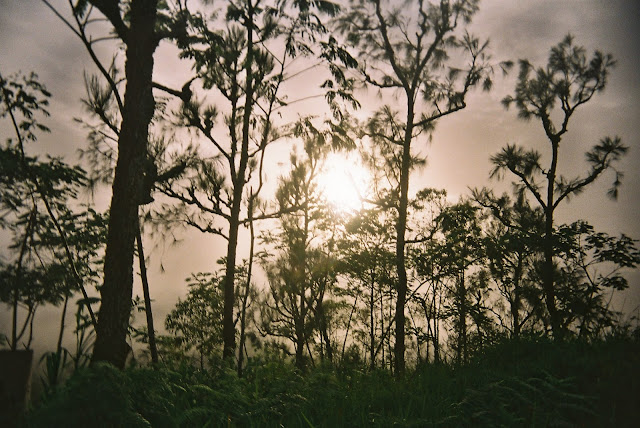 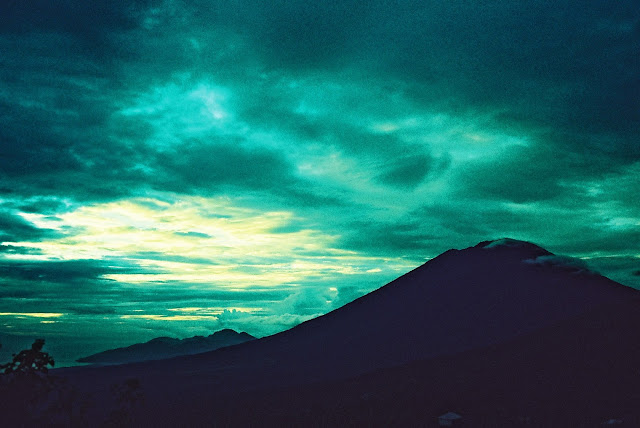 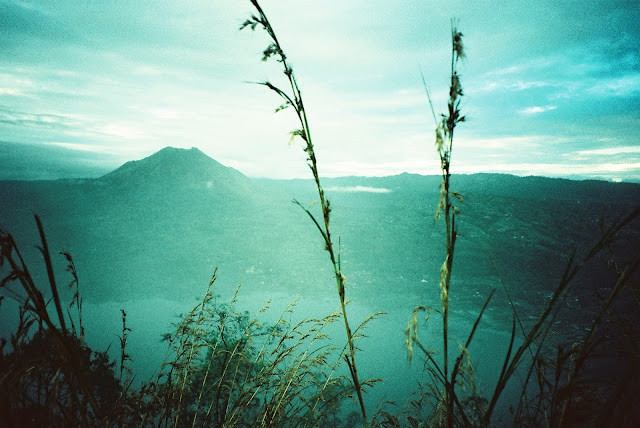 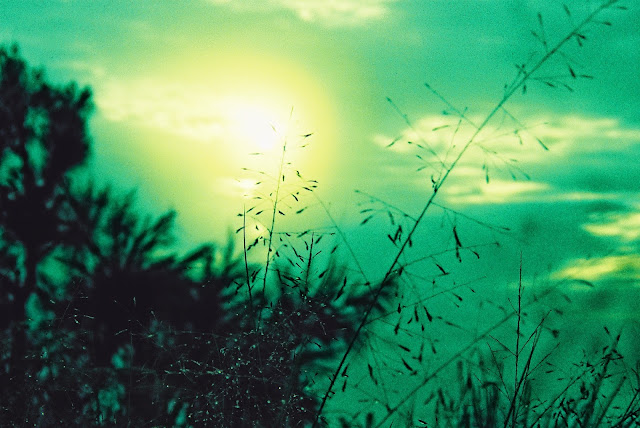 
Being afraid that it would be quite chilly as we had to start the journey around 4-5 am to catch the sunrise on top of the trail at 6:20 am, I brought along an autumn jumper, a windbreaker, and wore a sleeveless thing underneath. My pants were those cool three-quarter length yoga type sport pants, and quite-new Columbia hiking boots. It was a pain finding the right socks here in Singapore, all sports socks seem to be at an irritating ankle length or just slightly above the ankle, this length always bites my ankles and seem to roll down one foot at times. I finally found my dream socks - I cannot remember the brand, but they had extra thick towel-like material on the soles, moisture-wicking technology, and at the desired length of above ankles! Earlier I had bought for Dad a spanish brand sport jacket and track pants because I was afraid he would be cold too, but the jacket only came in handy at our airport, brrrrr, and he trekked in a thin white cotton shirt, blue jeans and Caterpillar boots.

The road uphill was not too bad, it was actually paved over 2-3 years ago and it was neither slippery nor narrow, in fact, there were many villagers' motorbikes and vans passing us on the trek. We were the only non-locals on the road to the amusement and curiosity of the friendly village children. We were told that it was off-peak season (though there were throngs of tourists at Kuta), and during peak season our guide could do up to 5 treks a day!

I realised I was still not very fit, indeed! I had to stop at quite a few places when it got too steep - lucky for me my Dad was doing the same thing, the cold mountain air and breathing in deeply had caused me to stop and catch my breath until it regulated. My Dad got his 'second wind' and after years of being a police trainer came back to him, he bounded along happily at the last third of the trek, together with the guide, talking enthusiatically about cows (they are called 'lembu' in Indonesian) and everything about the village. I was content to lag behind and slowly strip off the windbreaker and the jumper, taking photos, in a happy bubble with the Quechua walking stick (this stick is really good, I want to buy it) and the morning sounds of the village awakening: motorbike sounds, rooster crowing, villagers waking up. It was really quite noisy compared to the stillness and silence I had experienced on Ijen Crater! 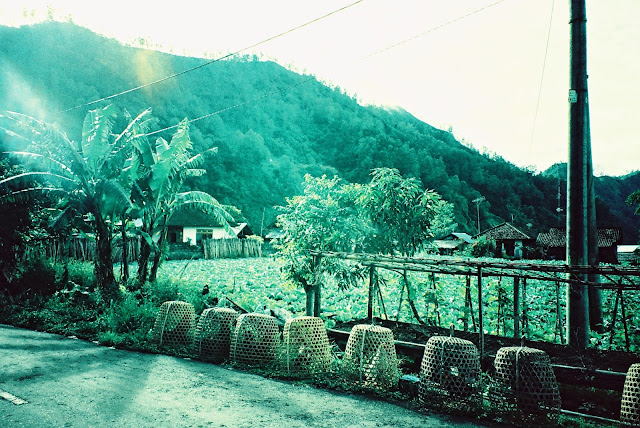 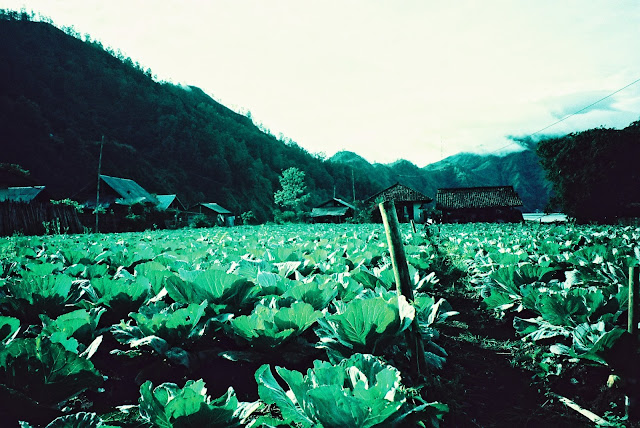 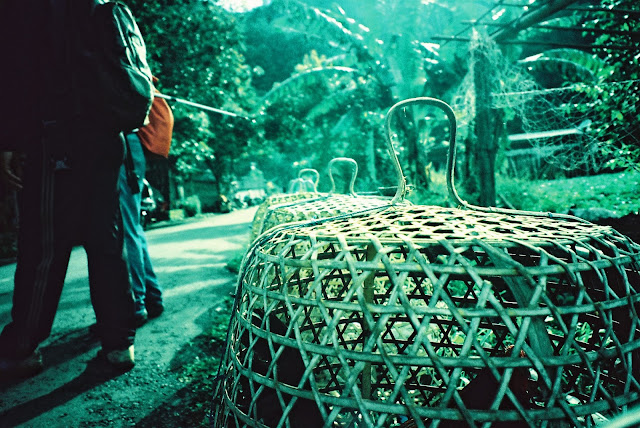 These baskets are used to keep the roosters inside from wandering about. They are reared to be sold as fighting roosters, a popular sport with the villagers.


Being his first trek in a foreign place with a guide, my Dad held the same kind of wonder and excitement as me when I went on my first trek. I hope I never lose this sense of wonder and wanderlust - to a city girl it is novel to witness everyday village scenes such as chickens running across the road, rows of cabbages, wildflowers in the mountainous foilage, framed with tall skinny pines, clouds that were on your eye -level, no longer above you, but right in front of you, and if the wind takes them nearer, you will be in the middle of them, blown into clouds, seeing nothing but white mist and the indistinct outline of the hazy mountains beyond.

Later we went to the Hot Spring for an hour, ahhhh... that was just perfect to soak into for the aching toes!

I have always loved baths and it was a long time since I had such a long bath until my fingertips was 'pruned'. Hoping that all parts of my body would benefit from this supposedly therapeutic experience, I made sure that the top of my head, all the way to the tips of my toes, were focused on the splish splooshy pressured water pipe coming out of the mouths of the cute statues! The place was very relaxing, no other tourist was there, and the view of the mountains was just indescribable. 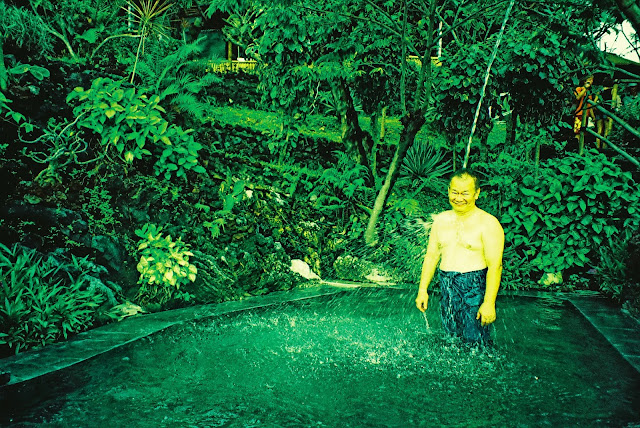 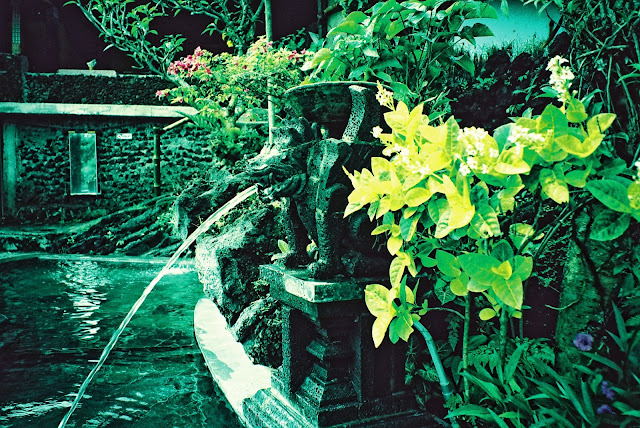 Amazing Balinese style arrangement for a pleasing view as we relaxed in the Hot Springs which was also bereft of tourists. The view on the other side was of the lake framed by mountains, I couldn't decide which was better. 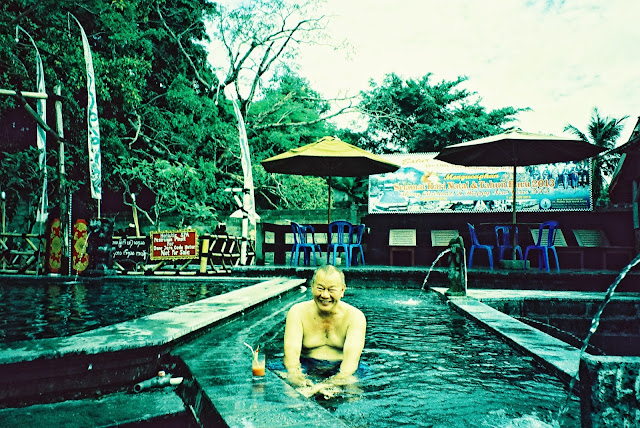 We felt like millionaires who booked the whole place for ourselves! (It turns out that many people came just when we were leaving, so I guess we were the early birds.) 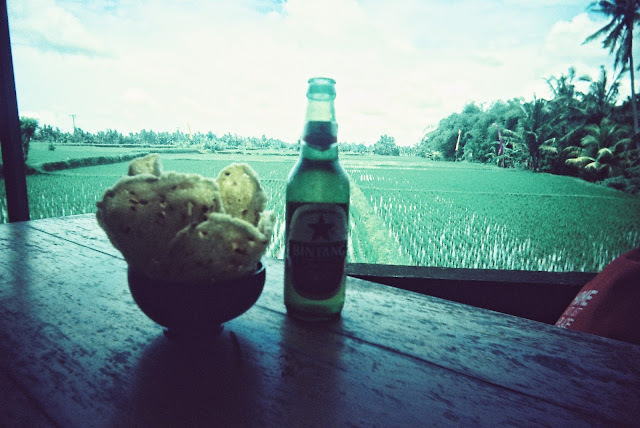 I'm not a fan of beer usually, but the price of a small Bintang anywhere is less than S$2. The rather touristic padi fields was still a nice view to gaze at while eating.

The guided trip ended with a lunch overlooking the ricefields. It was empty at first but later many other tourists (who did not climb the mountain) joined us at the Ubud area. We could also choose to go to the other sights such as batik-painting, silver craft, wooden souvenir making, but we only wanted to go to an organic coffee plantation where I saw the maker of Kopi Luwak, the civet cat, for the first time. I had tried Kopi Luwak in East Java last month - at $5 for a pot of 3 cups, it was at a much better price than in Bali - $5 for a cup. I didn't really taste the difference, but the coffee was really good coffee anyway, and as a coffee drinker I had to try it at least once in my lifetime, without any queasy feeling to the way it was produced, as the locals will happily describe to you. The two civet cats looked like a cross between a bat and a fox (actually I have never seen a fox before), a kind of evil-looking non-kitty-like cat. Also, they looked ready to tear my fingernails off, so I was immediately quite terrified of spending too much time looking at them. 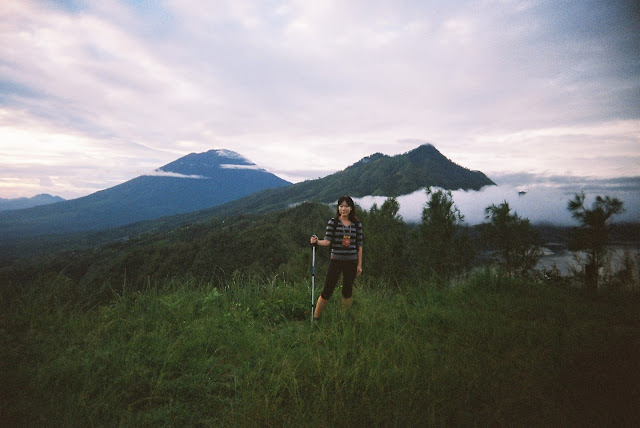 On the same level with clouds, what a great feeling! 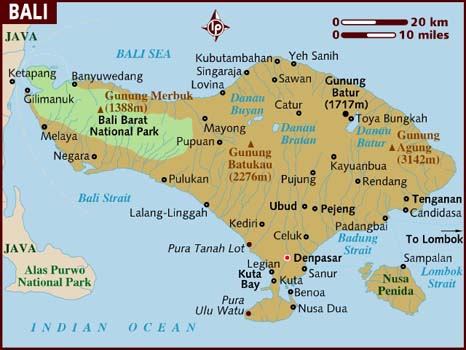 The top right of the map (from LonelyPlanet) shows the area we went to, the largest lake in Bali, Toya Bungkah Village/Hot Spring, Mount Agung - tallest peak in Bali, and Mount Batur.

I did some research online and decided to be guided by the team from Nyoman Gede Mahayuna. He's an experienced guide and mountain lover who decided to form a guide team. Due to the whole area having really low wi-fi and internet reception - as well as being in the mountains, they took a few days to reply but it was all arranged in due time as I had messaged them almost a month in advance.

Yon Ariono was our driver and co-guide, he prepared breakfast for us and provided us with hiking sticks and mineral water. He is the type of happy driver, passionate and looking like he's always up for a good laugh. I am really thankful that he brought much joy to our trip. Later I still had some energy to walk around quite a fair bit of Kuta before being totally tired and I realise, that when I get totally tired I am unable to talk to anyone, unable to talk at all, just making grunting sounds and wanting to snuggle up and fall into a deep slumber without any alarm clock waking me up at unearthly hours. =) 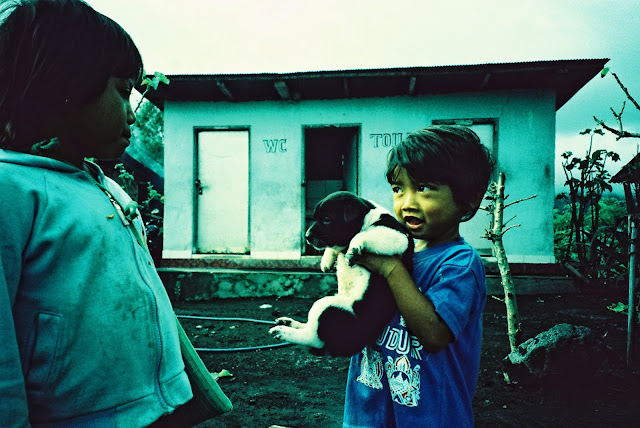 Anonymous said...
This comment has been removed by a blog administrator.
11:24 AM

Hey I know this is off topic but I was wondering if
you knew of any widgets I could add to my blog that automatically tweet my newest twitter
updates. I've been looking for a plug-in like this for quite some time and was hoping maybe you would have some experience with something like this. Please let me know if you run into anything. I truly enjoy reading your blog and I look forward to your new updates.

I am sure this post has touched all the internet people, its really really good paragraph on building
up new webpage.

Hello There. I found your blog using msn. This is a really well written article.
I'll make sure to bookmark it and come back to read more of your useful info. Thanks for the post. I will definitely return.

Hi, I log on to your blog on a regular basis.

Your writing style is witty, keep up the good work!