Bangalore in a weekend: first time to India 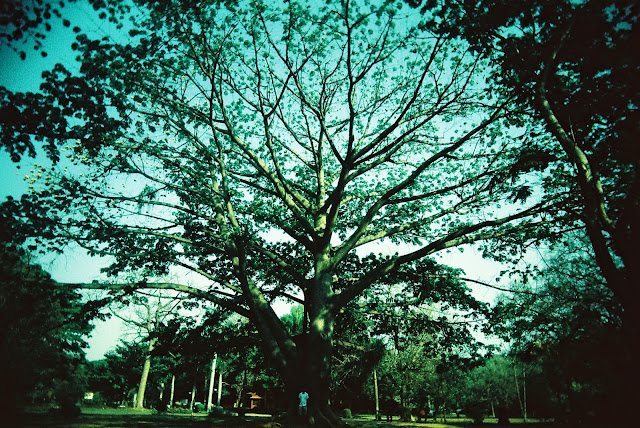 
I recall saying recently, during a conversation with a globetrotter, that I will never go to India. Teehee.

How should I put it - I think I just don't like to visit a place without proper infrastructure. Toilets. For women, it is really a hassle, you know, especially when the water is brown and the toilet is a hole in the ground. I don't particularly like to be stressed out by people trying to sell me something too, that's why I prefer traveling in less touristy cities where the locals are sincerely interested in you instead of trying to sell you something. But there is nothing like that in Bangalore. Bangalore has amazing roads, straight long roads and highways that are clearly indicated, and the most hardworking people I have ever seen.

I made Bangalore my first destination in India because a friend, Huggy, had been encouraging me to come to INDIA. COME TO BANGALORE, he commanded, much like the way he barged into my office when he was having meetings in the area and commanded me to dine with him. Not having any good destination in mind for the Good Friday weekend anyway, I booked the trip a month in advance. It cost $407 which I was told was a steal (usually $600ish). I also had many Bangalorian friends and acquaintances working here and when I mentioned the place they would suddenly have a dreamy look in their eyes and recall the good old days of zipping around in a motorbike. They seemed proud of me that I had chosen to go to this place on vacation, and before and after my trip I had received many messages from my work acquaintances, Banaglorians who wanted to know how my trip turned out to be. 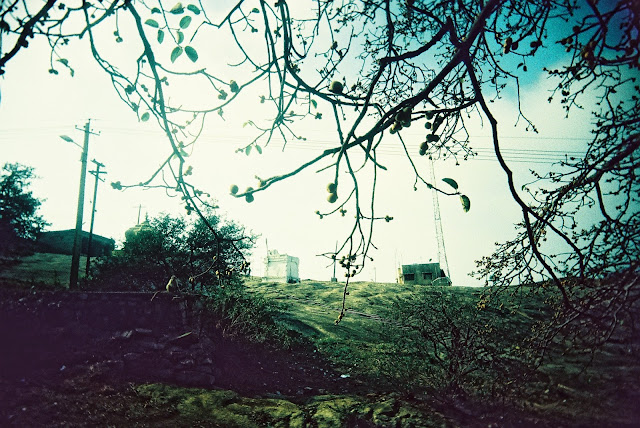 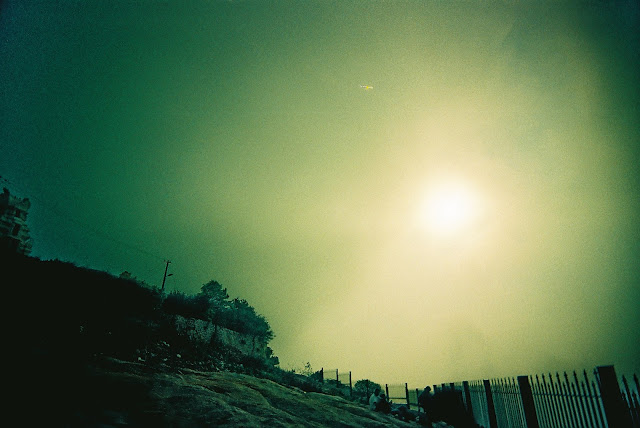 
On a Sunday morning I went to the Chickpete / Chickpet area. Just in front of the long streets selling sarees, kurtas and household items, there is a flea market where people set up shop to hone their wares; be it fruit, pans, or sometimes, hair extensions. And that is a place after my own heart.

Makeshift stalls appeared, they consisted of baskets turned upside down, covered with a cloth, and all kinds of gorgeous fruit stacked neatly in piles. Generally not a fruit person, I went into a sublime state when I tasted this fresh, pink guava that had an amazingly sweet and fruity scent. The guavas were unlike the ones found back home that were gnarly looking and green, similar to a soursop. The ones in Bangalore were round, orange-sized and had pale yellow skins. I have never tasted anything like this! I knew why they were unpopular though, they had lots of tiny little hard seeds that could be unpalatable to swallow. We also bought fresh figs, what a delight, and a pomegranate, and if it weren't my last day there, I would have bought fruits aplenty! 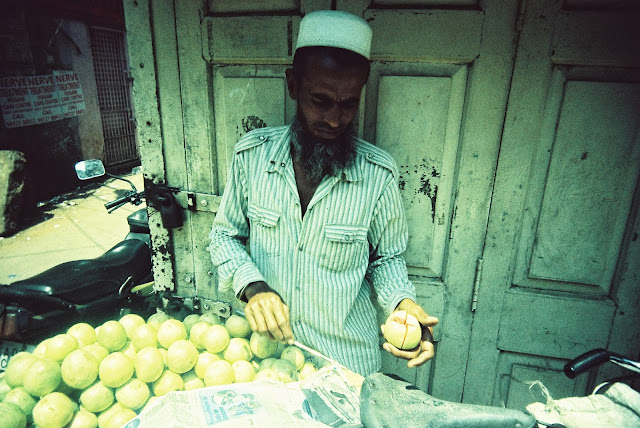 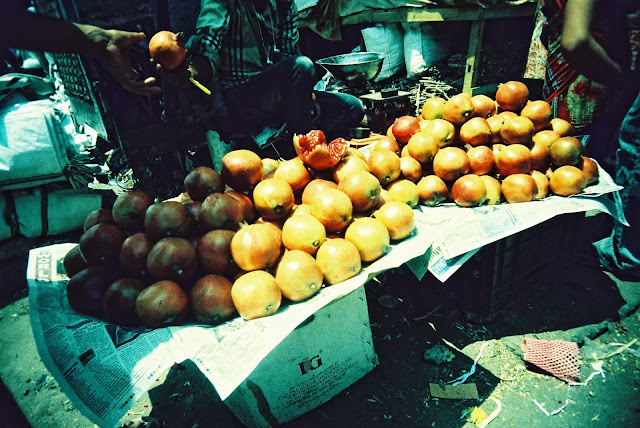 While on the motorbike I saw a hardworking lady, her shop stall was a makeshift covering and the goods were shoes piled on the pavement near the bus terminal. Her stall only sold shoes, and she was scrubbing and washing the dirt away on the items, scrubbing with a passion that most of us wouldn't possess. The shoes were shiny and clean, bereft of the dust that seemed to blow constantly on some roads. Elsewhere, I saw little girls threading flower garlands for sale without complaint. I saw men carting large amounts of produce, sugarcanes, sacks on their head, and they did it speedily and seemingly not unhappy about it. Even the auto-rickshaw drivers, many of whom we asked for directions, were just able to rest peacefully in the tunnels while waiting for their next passenger. I liked the auto-rickshaw very much, we took one during one of the nights out. Just call "Otto!" and a couple of tuk-tuk looking autos will come your way, stating their price. There wasn't any abject poverty that I had seen on this trip, even 2 hours far from the city, there are small villages, it's true, and barefooted people, but they seem happier than city dwellers as they walked hand in hand with each other in their village of colorful walls and dirt roads. I was told that even the beggars had mobile phones. Elsewhere there were cows on the roads eating trash but it seemed not all that disturbing to me. I hope I didn't contribute to their meal though. 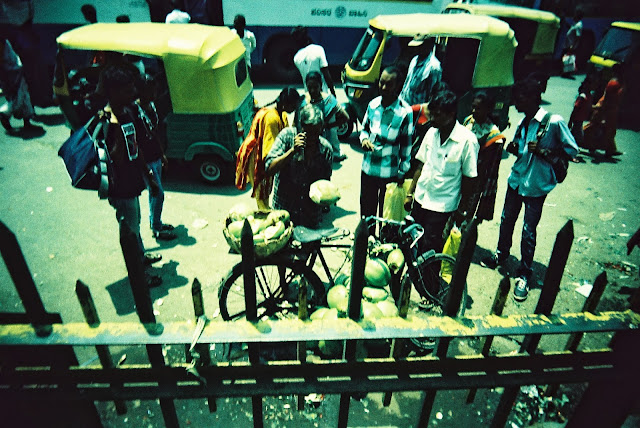 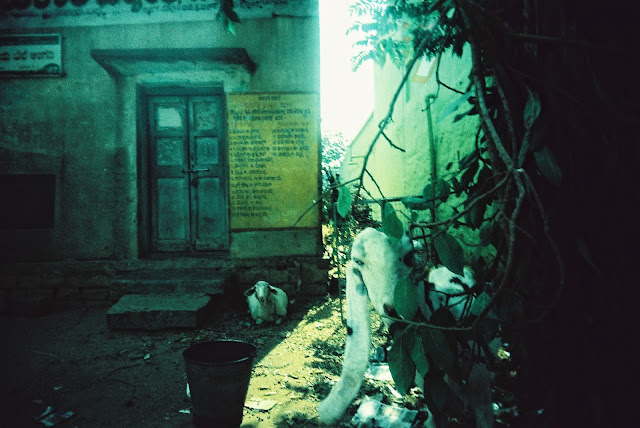 
There were large graceful trees lining the roadways to the residences in Karnataka, a beautiful respite from the shade, that was one of the things I looked forward to seeing after long hours on the motorbike with Huggy. Tree lined avenues. There's just something majestic and soothing about riding through the road with the old trees beckoning your arrival.

At this time, I have already booked my next trip that is a little longer than a weekend (For this Bangalore trip I left Singapore Thursday night straight after work and came back early Monday morning) to Sri Lanka. I think one of the best things about travel is that you became more open and more aware of things, if not things happening in the world, then at least, things happening inside yourself, jauntily happy at the fact that you are capable to travel alone and book flights by yourself and find your way about without knowing the local language, you should be proud of yourself! And I think the most meaningful thing about this trip is that I made a new friend in Huggy. We graduated from being unreliable lunch buddies in Singapore to being able to talk about anything under the sun, and not just casual conversation. And so we will make our way to Sri Lanka next month, as good travelfriends.

With him, I spilled the beans on my innermost thoughts, the good and bad, why I really like certain books and authors, and being blunt about the type of things I dislike. I guess in most cultures there is a need to be diplomatic or inoffensive so he was really secretly impressed when I opined my true feelings. Later, I felt gushy when he said that he had learnt one thing from me, that was: To complain less. Aha! He was impressed by the fact that I had not let one peep of complain out any single time during the trip. (I did complain vigorously at the end when I learnt my flight was delayed for two hours, meaning that I would have to take a leave from work...)

I felt so gushy. Gush gush gush. And I found that we have something in common, when we are happy, we start to sing songs. Akin to a puppy wagging its tail in delight, we can't help ourselves. What are you singing, Huggy? He was singing a classical hindi song about first loves. Ah, how nice it is to have a happy weekend!

Posted by spiritedly viva esperanza at 9:48 AM

Excellent blog you have here but I was curious if you knew of any forums that cover the same topics talked about here?
I'd really love to be a part of online community where I can get opinions from other experienced people that share the same interest. If you have any suggestions, please let me know. Thanks a lot!

Well Rachel India is no longer a snake charmer's land, and even when it was - it was still a wonderful country full of wonders.

pradeep - we met at the APA prize ceremony