From Windmills, To The Hague (Den Haag) and Scheveningen beach 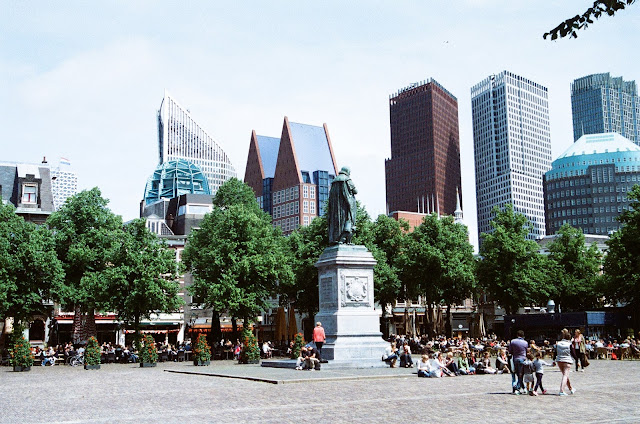 The interesting Dutch architecture as viewed from the town square in The Hague.


A very precise One Day's Itinerary in The Hague/Other near and not-so-near parts of The Netherlands.

As The Netherlands has very precise public transport timings, it's easy to do many things in one day if you have a good plan. If the trains were more than a few minutes late, the timings to subsequent stations were updated in real time and flashed on the small screens in every commuter cabin! I was mesmerized. Initially when I reached the trains I asked the nearest stranger if this was the train to my destination, four stops away. He checked the board and double-checked on his smartphone app the exact time I was to reach my station, incredible!

Here was how my VERY packed one day went; here I was visiting a friend who resides in The Hague!

Morning
Started the day at around 9:30 am, commuted to Rotterdam to take a watertaxi (10:30 am) and changed to another smaller boat to visit the Kinderdijk Windmills.
(I find this boat info accurate: http://wikitravel.org/en/Kinderdijk)

Oh yes, don't forget to take a look at the interesting architecture of Rotterdam along the port, the almost unbelievable cubic houses! http://www.holland.com/us/tourism/article/rotterdam-cube-houses.htm

Reached Kinderdijk (11:05 am), walked for 10 minutes to reach the windmills. I just followed the other windmill tourists who looked more sure of the route, teehee.

Having read about the windmills of Holland since I was a child, seeing them now I can say that I really feel blessed to be part of this experience. They are really quite magical when you view them in reality.
http://en.wikipedia.org/wiki/Kinderdijk

Took a bus leaving the place at 1:07 pm (in the direction of Zuidplein), to the train station Rotterdam Lombardijen where the train leaves every :44 and :14 on the hour. 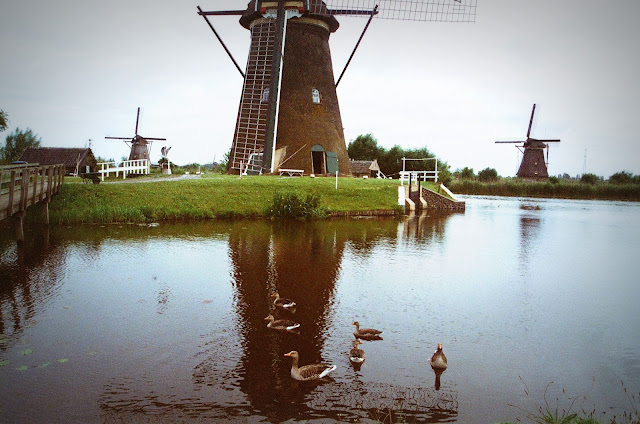 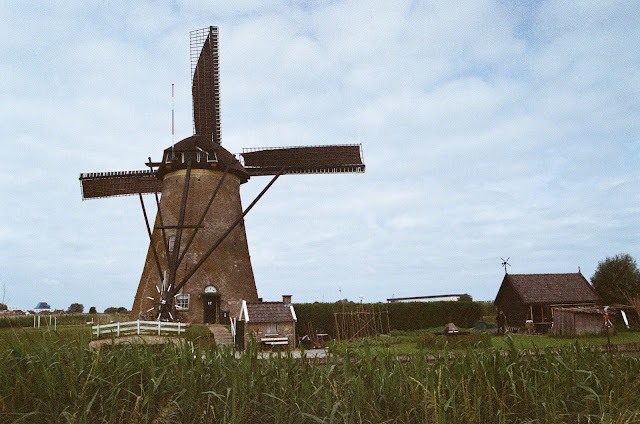 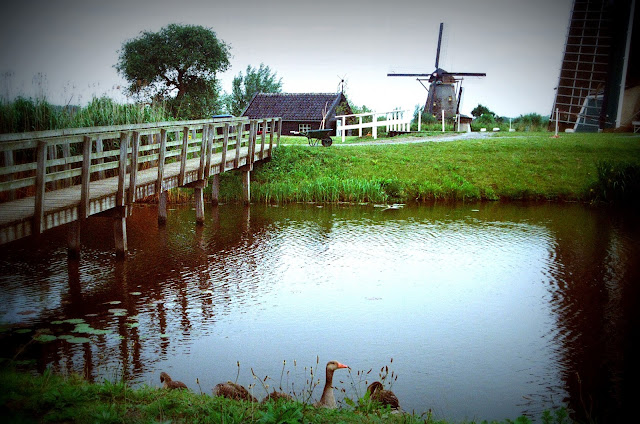 Walked around for street photography at the town square, had a coffee (for 1 Euro!!!)

Wanted to see a museum exhibition and decided on Escher, there were plenty of top exhibitions within walking distance in the area!! Escher was very very good, apart from seeing his famous works there were others that were equally intriguing. I wasn't aware of him being Dutch so it turned out to be a splendid surprise for me! http://www.escherinhetpaleis.nl/

Evening
Left to go to Scheveningen beach around 5 pm, back to my friend's house for dinner and we even had time to catch a midnight movie at the iMAX theatre that was walking distance as well!
http://www.denhaag.nl/en/residents/to/Pathe-opens-IMAX-theatre.htm

The beach was great, full of life; there was a carousel that I really liked, lots of interesting sculpture art scattered around the area, including one of the story of the dutch boy who put his finger in a leaking dyke to save the village - immediately remembered this story from my childhood days when I saw that sculpture! http://www.pantheon.org/articles/l/little_dutch_boy.html

I found the Dutch to be friendly, despite their cool demeanour, many 'Uncles' greeted me as I walked past, both in the small towns and in the beach area, we found a young Dutch who chatted with us as we walked along the stretch of beach with him and his dog, another couple of guys were having a stag party and shyly asked me to sign on his t-shirt; I was sweetly given a rose in return, awwww!

Many locals were just out walking, having grills, skateboarding and bicycling at the long stretch of the beach grounds. It was too cold to bathe at the end of July, but just a week later the suntanning crowd came out in full force as it got warmer. 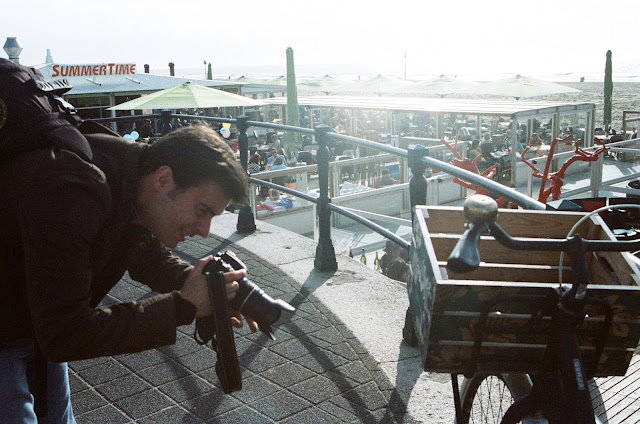 We saw many well-designed functional bicycle acccessories, here is a crate box! Behind, people having grilled meats for their dinner on the sunny beach of Scheveningen. 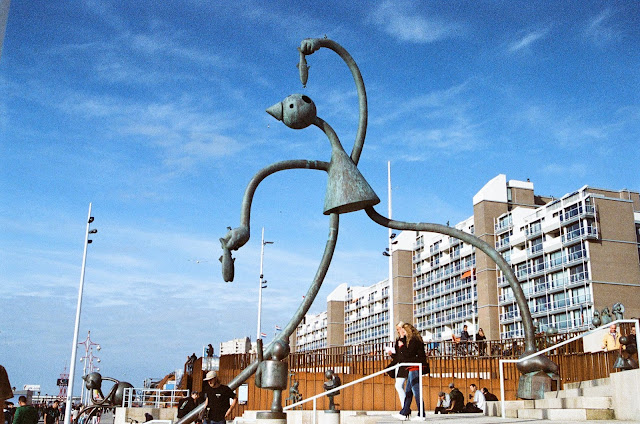 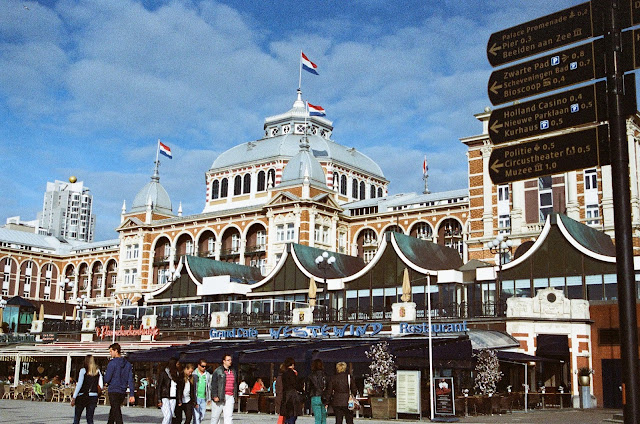 I did see many (not so young) Dutch relishing raw herring exactly like this sculpture! (mostly without the fishheads or tails, though.) And the Kerhaus, a grand architectural piece, now a hotel. 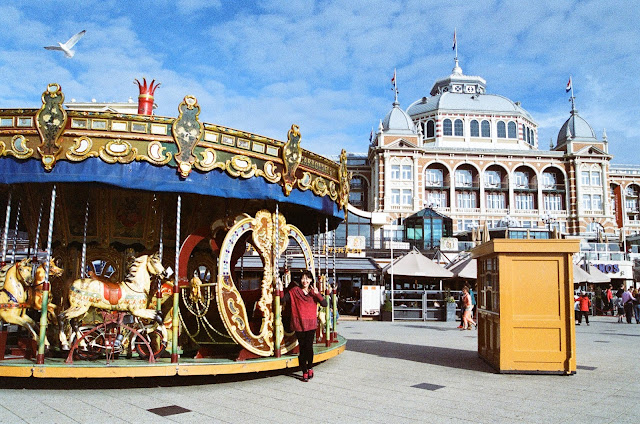 Sheepishly, I have to admit that each time I see a carousel I get enchanted and have to take a picture with it!!! 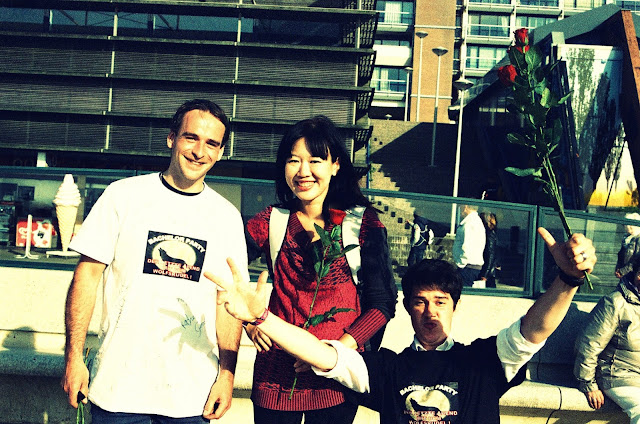 I signed my name on his shirt!

Wandered around the interesting streets and (randomly) chose a place for morning coffee; later found out that it was rated as one of the best places in Holland to have a cuppa, wow! It's moments like these that I like best about travel, and unplanned travel!
http://www.lolabikesandcoffee.nl/lola/Welkom.html

While having coffee decided to visit the Gardens that was a tram ride away to Clingendael. It was beautiful and I can think of no better way to spend a relaxed sunday afternoon. Also, the friendly patrons of the cool coffee place gave us specific directions on how to get there!
http://www.denhaag.nl/home/bewoners/to/Japanese-Garden-in-Clingendael-Park.htm

I had to leave for Delft at 4 pm, so we were back to The Hague and had a small lunch; and visited a flea market, looking like it was mostly elderly people selling off their keepsakes and some for profit. Many old maps and posters, vases; tin boxes, vintage household items, musical instruments, typerwriters. I bought two nice neckscarves for 1 Euro each, a great find!

(The flea market was on a Sunday and located near these Russian sculptures  http://www.thehaguephotojournal.com/russia-xxi-hague-sculpture-2013/) 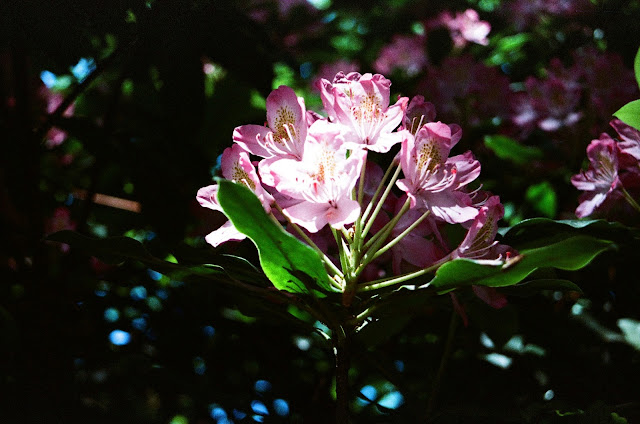 A Dutch blossom at Clingendael Botanic Gardens, I liked the place very much!

We found the supermarkets were open on sundays until 6 pm!

Taking a direct tram leads to Scheveningen from The Hague's tram stops, it is also possible to walk there if you wish. All trams information and timings are listed on their sheltered stop areas. Strictly no eating allowed on trams...

It is really very convenient to purchase the Dutch public transport pass that is used on all trains; as well as buses, and trams. For one day's multiple trip, budget between 10 - 20 Euros. Alternatively, pay by coins and as the machines usually do not accept cash, you will need to have plenty of coins handy.

Did you know that the tallest people in the world are the Dutch? I have to agree, after seeing the streets of graceful, long necked, poised, tall, and fair ones!

All photos taken in 35mm film, lomography 800
Posted by spiritedly viva esperanza at 10:00 AM